Falls to his death

Adrian Ripburger was Malcolm Corley's right hand man in Corley Motors, but more sinister than wished for. His thugs are Nestor and Bolus. Despite his position, he never rode a bike, claiming a destabilizing inner-ear condition. Malcolm never liked him, but respected his killer instincts and business know-how.

10 years ago, he rose to executive status and was nicknamed "Boy Wonder". He had ideas for streamlined manufacturing through robotiation, resulting to downsized work force. These announcements created an upheaval in the stock markets, but Corley opposed them. Rips give frequent successfull speeches at the Rotary Club and garden Society.

Rip was impatient to wait for Malcolm to die of natural causes. He knew that by then he would be left out of the job. His vision was to sell the company off to foreigners, lay off workers and start making minivans

On their way to a shareholders meeting at Corville, he suggested to be accompanied by a gang of bikers; that way he would assassinate Malcolm and blame the gang for this.

Assisted by his thugs, they managed to hire the Polecats in the Kickstand and when he killed Malcolm, Ben Throttle was accused for the murder. However Miranda Rose Wood took photographs of the murder and they failed to catch her, but Bolus got her camera. He then ordered him to go to Melonweed and assassinate his daughter, Maureen Corley.

Sometime later Nestor drove him to Melonweed and saw that Bolus blew it up. He was down unconscious and Maureen was running away. He then realised that he sometimes forgets which one is mentally capable.

In order to lure Maureen Corley out of hiding, he placed the legacy bike of her father as the first prize to the Corley Motors Smash-A-Torium Amateur Driver Ultimate Destruction Maximum Carnage Marathon. Nestor and Bolus tried to kill her but they were killed in the process (which saved Ripburger some millions as he had promised to make them vice-presidents of Corley Motors)

He was exposed at the shareholders meeting, and he disappeared. He took a Truck and ran. After the Shareholders Meeting was over, Ben and Maureen took a ride on Ben's Bike. Ripburger's truck had slipped behind them and he rammed Ben and Mo off of the bike. After Ben removes the trucks fuel line, Mo tackles Ripburger and they are apprehended by the Vultures's plane.

Once inside the plane, Ripburger fires his truck's machine guns at all of them, inadvertedly damaging the plane's controls as it was headed for the bridge that was destroyed earlier in the game. Ben warned him about this, but Ripburger simply tells him not to "ruin the ending," seemingly not caring if he died along with the rest of them. As Ben tries to stop the plane by raising the landing gear, Ripburger points his gun at Mo but is tackled by Ben, who struggles with him until the truck is thrown out of the plane and is left dangling over the gorge, with Ripburger hanging by his suit on one of his truck's guns. He is ultimately killed when Ben shuts down the truck's defenses, sending him falling into the gorge while clutching a license plate that reads "Can't Beat a Corley". 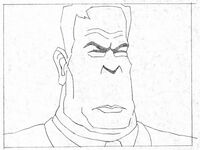 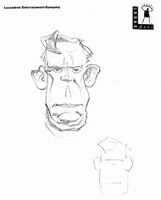 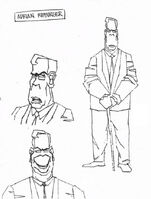 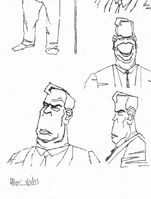 Add a photo to this gallery
Retrieved from "https://fullthrottle.fandom.com/wiki/Adrian_Ripburger?oldid=4568"
Community content is available under CC-BY-SA unless otherwise noted.