Game is in third-person. Using the mouse, players click the left button to move him and hold it over certain objects to view their interactive options; a graphic menu rendered as a flaming skull displays a fist ("use", "grab" or "hit"), eyes ("examine"), tongue ("speak" or "taste") and boot ("kick"). After the menu appears, the player then selects one of these icons for the desired interaction. The inventory of collected tools or weapons was invoked by right-clicking anywhere on the screen. It also contains portions where the player is required to drive, combating enemy bikers with punches and kicks and later chains, planks, and other crude weapons.

The story is set in a dystopian future year 2040 where motorized vehicles are giving way to anti-gravitational hovercrafts. A hardened biker named Ben is the leader of a motorcycle gang called the Polecats. As his gang rides down Highway 9, they come across an expensive white hovercraft limousine. Ben, in the lead, unceremoniously drives over the limousine, crushing the hood ornament. Unknown to the gang, the limo belongs to Malcolm Corley, the CEO and founder of the last domestic motorcycle manufacturer in the country, Corley Motors. Intrigued and impressed, Corley demands his driver catch up to the gang.

As Ben and his gang relax at the Kickstand bar, Corley approaches. Malcolm befriends Ben with stories of his past adventures as a biker. Before long, Corley's sinister vice president Adrian Ripburger enters the bar and asks to speak to Ben privately, outside. He asks Ben to have the Polecats appear at the upcoming annual Corley Motors Shareholder's meeting as an "escort". When Ben declines, he is knocked out and thrown in a dumpster by Nestor and Bolus, malicious henchmen of Adrian Ripburger. Ben later awakes and attempts to link up with the Polecats, whom Ripburger has coerced into escorting Corley to the shareholder's meeting. However, Ben finds that his bike had been sabotaged when he attempts to catch up. After crashing and falling unconscious, he is discovered by a reporter named Miranda, who manages to bring him to "just the right person". When he awakens, he meets a female mechanic named Naureen (or Mo for short), who patches up his bike with a few parts she asks Ben to retrieve.

Ben finds his gang waiting for Corley while he's in the restroom at a road stop. Meanwhile, Miranda witnesses Ripburger murder Corley outside of the restroom and manages to take pictures. Bolus snatches the camera while Miranda escapes. After they leave, Ben discovers Corley and with his dying words, he tells Ben that Ripburger did this to take over the company and he intends to produce mini-vans instead of motorcycles. Ben must set things straight by finding his daughter, who is revealed to be Maureen.

With his gang now jailed in connection to Corley's murder, Ben crosses the desert as a framed fugitive to find a way to clear his name, save his gang, and prevent Ripburger from turning Corley Motors into a minivan producer. He crosses paths with other motorcycle gangs: the speed-addicted Vultures (of which Mo is later found to be a member), the brutal Rottwheelers and the enigmatic Cavefish. After much ado, which included crossing the Devil's Canyon using Vulture's accelerating device, Mo's attempt on Ben's life (since she is assured Ben has murdered her father and remains so until she sees the pictures Miranda have made) and the fiery demise of Ripburger's henchmen, Ben arrives at the shareholders meeting in time to catch Ripburger announcing his reign over the company. Ben and Maureen expose Ripburger as the murderer with the pictures Miranda took and broadcast the last will and testament of Malcolm Corley, who names Mo the rightful successor to his company. Exposed, Ripburger flees the scene. As Ben and Maureen ride away, Ripburger makes one final attempt to ram them off the road in his semi-truck. Maureen's gang, the Vultures, arrive in time in a land-driven cargo plane to immobilize Ripburger's truck. The vehicle comes to a screeching halt over a bridge demolished earlier in the game, and after a final conflict, Ripburger is dropped into the gorge below. Corley's funeral follows and with the Polecats freed and Maureen in her rightful place, Ben rides into the sunset on his bike.

Full Throttle was released only on CD-ROM, featuring a full voiceover soundtrack. The project was led by Day of the Tentacle creator Tim Schafer, who was also its writer and designer. It was also one of the few LucasArts games to use externally recorded music, courtesy of The Gone Jackals. Certain tracks from their then current album, Bone to Pick, were featured in the game. The track that supported the game's introduction was a shortened version of "Legacy", the album's second track.

According to Tim Schafer, Full Throttle originally would have featured a sequence where Ben undergoes a peyote-induced hallucinogenic psychedelic experience/trip. This was eventually ejected from the game, because the developers couldn't get it to "work out" with the publishing. The concept eventually became the basis of Psychonauts.

Being a title from LucasArts, a few Star Wars references were worked into the game. Truck driver Emmet is seen with an Imperial logo tattoo on his right forearm in one scene and a rival driver during the demolition derby sequence was illustrated to look like George Lucas. Also, in a scene where Ben is talking to the reporter, Miranda, she says "Help me Ben, You're my only hope!", a paraphrase of a classic Star Wars line.

The game received, according to MetaCritic, generally favorable reviews and has over the time become a cult classic of adventure games. Weak points of the game included its linearity and short duration — elements that brought the game in comparison to Loom. Full Throttle retains a stable fanbase that keeps developing the setting and the story on their own, for example, through modules for a popular role-playing game system Fudge, 65daysofstatic used an audio clip from the game for their song "Asphalt and Trouble", whose title is derived from said audio.

Double Fine Productions anaunce that they are doing the remastered version of the game for 2017. 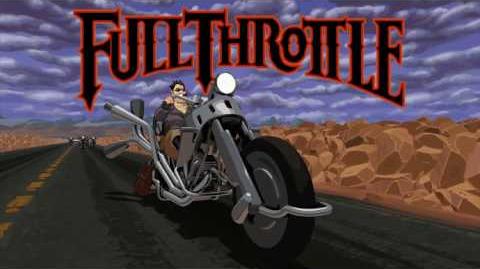 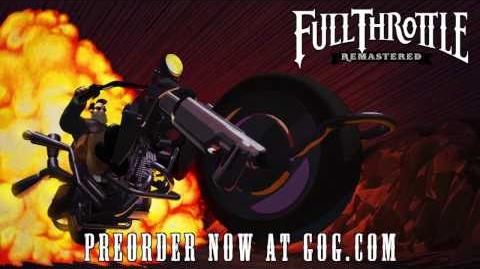 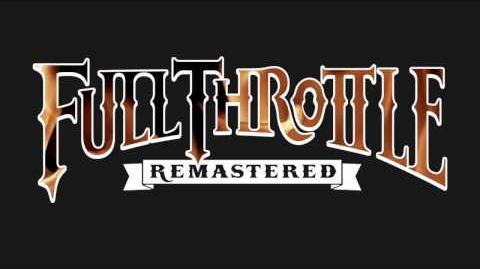 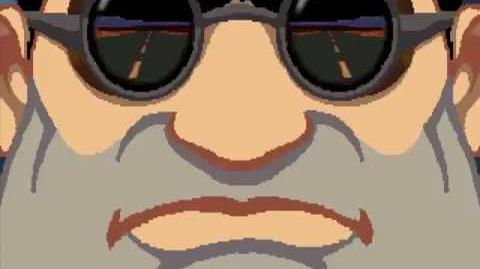 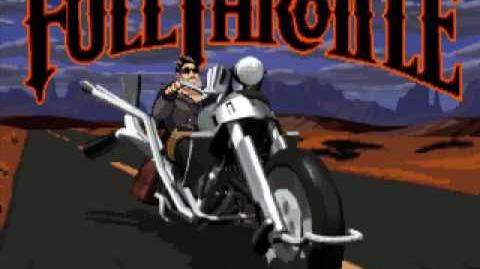 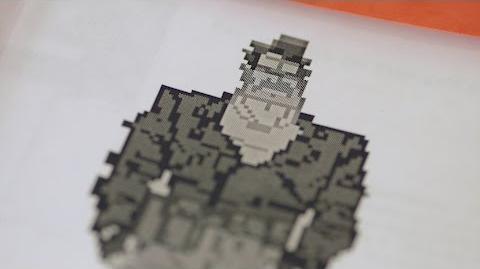 The Making of Full Throttle 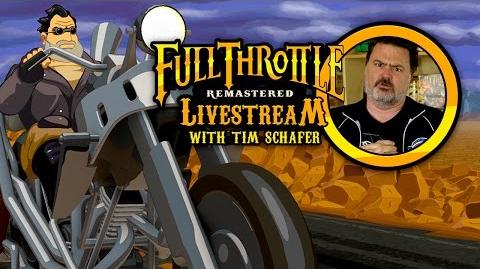 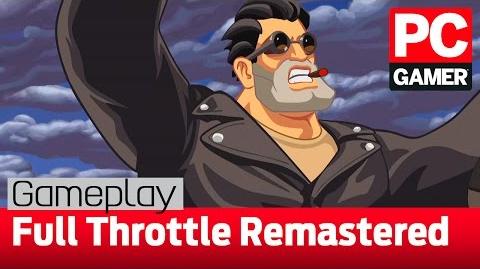 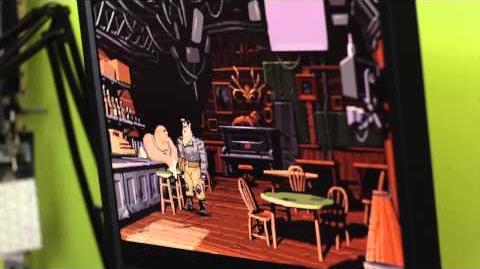 Retrieved from "https://fullthrottle.fandom.com/wiki/Full_Throttle?oldid=4626"
Community content is available under CC-BY-SA unless otherwise noted.