"You know I've never liked you, Rip. But you have business 'know how' and killer instincts that I respect".
-Malcolm arguing with Adrian Ripburger.

Malcolm X. Corley was a character that acts as a startup to the game's storyline. He's an old man and has a medium, middle-parted white haircut. He's Corley Motors and Corville's inaugurator and owner, former biker and Maureen Corley's father. He's voiced by late Hamilton Camp.

Malcolm is a veteran biker, in the pre-war Golden Age of cycles, when Corleys, Indigenes and Kramdens ruled the road. Mavis was a member of his gang, who was a looker back then.

He founded Corley Motors with Adrian Ripburger his right hand man. With his business know-how and killer instincts, Corley Motors became a monopoly in the industry.

It is suggested that Corley was married but Maureen was his illegitimate daughter. Soon after his birth, the new Corley factory was built. As Malcolm was focused on the manufacturing of motorcycles, the architectural deign was left to Rip and subordinates. As a result, the mammoth size factory at Corville contrasted the simple values of Malcolm and his customers, reflecting rather the insecurities of his underlings. His daughter used to visit him at hsi office thanks to a secret entrance and passage.

He had hired his old partner Mavis as a projector technician for the Factory's Auditorium. According to his secret diary, Ripburger made suggestions to upgrade the media technology, but Corley didn't wish to fire Mavis.

According to The Social History of the Motorcycle, the famous Ricky Myran approached and greeted him saying "You can't beat a Corley!" Malcolm noted in his secret diary that was the proudest moment of his life (other than the birth of Maureen).

Corley first appears in his limo arguing with Adrian Ripburger about whether or not biker gangs should be invited for the annual Corley Motors Shareholders Meeting. Shortly after that, Ben rides over the car and rides away to the Kickstand.

A few minutes after the Polecats arrive, Malcolm bursts in after leaving Ripburger waiting inside the limo and asks abruptly who rode over his car. After several minutes talking with Ben about his past as a biker, he's left at the bar with the other Polecats as Rip talks to their leader about their participation in the Shareholders Meeting.

After Ben is knocked out and left inside a dumpster, he can be seen talking to Darrel, saying he won't leave the presidential cargo to Ripburger, supposedly intending to fire him later on. Rip warns everyone that Ben is scouting out the route to Corville and Corley leaves with the bikers.

While talking to Maureen, he is indirectly mentioned, while she speaks about the Hardtail they built together.

He is later seen in the pit stop, right after leaving the restroom, where he is murdered by Ripburger, because he knew that Malcolm's will, will put him out of a job and he did not want to wait for natural causes. Malcolm knew Ripburger will sell the company to foreigners, lay off workers and build minivans.

Before Ripburger can finish him off with a last blow from his crane, Ben finds him in time. A Dying Malcolm ask Ben, to hurt Ripburger real bad and to find his daughter Maureen to take over the company, which Ben promise to do.

Malcolm's funeral was attended by Ben, Maureen, Darrel, Suzi, Razor, Michael, Father Torque, and many other bikers who had held a eulogy. 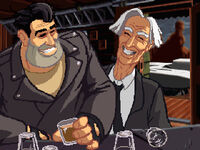 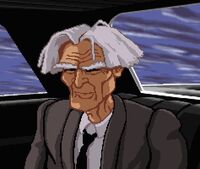 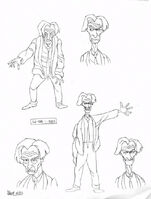 Add a photo to this gallery
Retrieved from "https://fullthrottle.fandom.com/wiki/Malcolm_Corley?oldid=4613"
Community content is available under CC-BY-SA unless otherwise noted.