Maureen Corley, known as Mo by her acquaintances, is the illegitimate and only daughter of the CEO of Corley Motors, Malcolm Corley. She was raised away from her father and mother.

Mo was born in Corville General on April 18. Her birth certificate doesn't mention her mother, only as "Jane Doe". Soon after her birth, the new Corley factory complex was built at Corville. A mechanical genius, she rebuilt her first carburator at age of four. Together Malcolm and Mo built a vintage hardtail one summer, but eventually left her alone because of Adrian Ripburger's suggestion. Malcolm still let her secretly enter the Corley Motors factory to help her father with bike designs. He used to call her the "Diapered Dynamo".

Eventually Malcolm had to leave her completely out of his life when she got older. She grew up with Uncle Pete in his Mink Ranch until he died. Then Mo was taken in by the Vultures gang and stayed in a shack in Melonweed. Although she was good at fixing bikes she also fixed any other mechanical device that came through her shack, leading Miranda to think that she could help heal Ben Throttle after his crash.

She fixed Ben's bike along with some assistance from Ben getting the necessary materials, also installing a Vulture exclusive bike booster that she called an "Average, everyday, Pre-Regulation, Destroyer-Class, Solid-Fuel Recoil Booster" as a way of thanking Ben for letting her work on a Motorcycle again.

When Adrian Ripburger killed Malcolm Corley, Ben was suspected to be the killer due to his gang being the only people near him at the time. Ripburger sent Bolus to kill Mo as Corley's last descendant, but she noticed him on a toaster camera and dropped the motorcycle ramp, knocking out Bolus. Before leaving she took his ID and identified him as working for Corley Motors. she also took Miranda Rose Wood's camera film from him and left for the Mink Ranch.

When Ben got to the Mink Ranch, he tried to approach her but she had stolen his booster and left him to seek shelter with the Vultures. Meanwhile Ripburger sent Nestor and Bolus to the Mink Ranch to stake out for her. They saw Ben returning and tried to hunt him, but they wrecked their Hovercar as they passed by Emmet's truck of overturned Fertilizer Powder. Ripburger caught up with them in his limo, seeing that they blew it again, he decided to use the legacy hardtail to lure her out of hiding.

When Ben came to the Vultures, they tortured him, until he convinced her that he was not the murderer. Then she developed Miranda's film and saw that Ripburger was behind this. She swears vengeance on Ripburger and Ben suggests exposing him at the Shareholder's Meeting.

The Vultures learned of Ripburger's plan to lure Mo; He would put the Vintage Corley Hardtail that Mo built with her father as the first prize for the Corley Motors Smash-A-Torium Amateur Driver Ultimate Destruction Maximum Carnage Marathon Destruction Derby that night. However Mo's drive was not sentimental: the bike had somewhere hidden the passcode to Corley's Floor Safe, containing his will and passcard to the Projector Room.

She participated as "Princess of Pileup, Doreen Schmorley" and Ben as "The Unknown Avenger". They would fake their deaths by mounting their derby cars with explosives. The "Boom-Boom Brothers" (Nestor and Bolus) tried to kill them. But Ben was successful in triggering the explosion. Caught up in fire, he distracted the audience as Mo in her eject seat landed near the bike.

Mo and Ben return to the Vultures hideout, where she dismantaled the bike and with help of Ben they find passcode for the safe. Mo atend the Shereholders Meeting where Ben expose Ripburger as the real killer of Malcolm Corley. At the stage she issue a new policy for the company. In the meantime Ripburger has escaped. 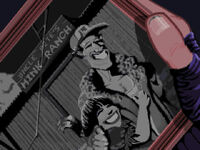 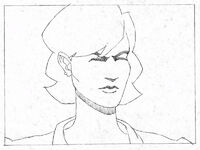 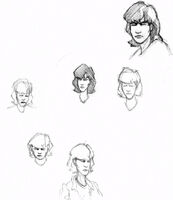 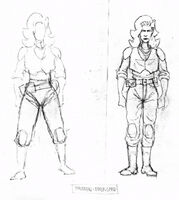 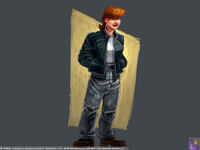 Add a photo to this gallery
Retrieved from "https://fullthrottle.fandom.com/wiki/Maureen_Corley?oldid=4629"
Community content is available under CC-BY-SA unless otherwise noted.