Todd Newlan lives in Melonweed in his trailer shack. He owns Todd's Junkyard which is guarded by his dog. He stole Maureen Corley's welding torch in order to create strange metal sculptures out of machine parts.

Todd was visited by Ben Throttle when he knocked on his trailer door. Ben was searching for information on who has stolen Maureen welding torch, but he was interrupted by Todd saying that he didn't steal Mo's torch. As he looked through the peep-hole, Ben kicked down the door of his shack and knocked him unconscious in order to search for the welding torch and loot his shack.

The next day (July 19) he told the story to police investigators and complained for his missing motorcycle parts, messing with his electromagnet and terrorizing his dog. According to the Melonweed Daily Star Picayune, the police had a hard time believing the story, as his junkyard was found locked and Todd didn't recognise the lock. Police doctor Michael Stemmle speculated that he had temporary amnesia caused by the head wound. 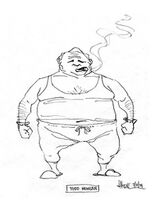 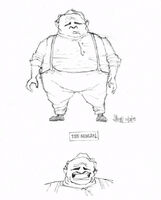 Add a photo to this gallery
Retrieved from "https://fullthrottle.fandom.com/wiki/Todd_Newlan?oldid=4589"
Community content is available under CC-BY-SA unless otherwise noted.